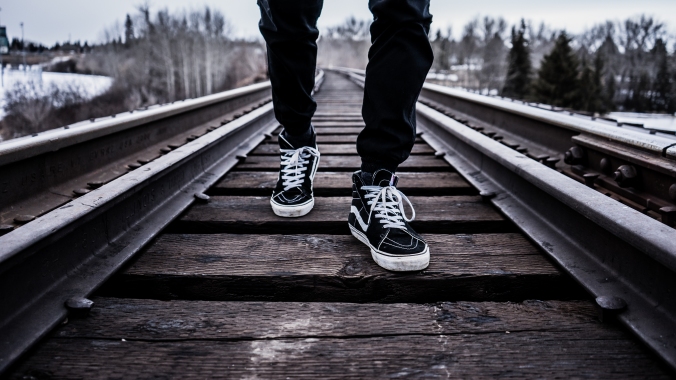 Last week I read a gripping piece of writing over on Chev’s Life blog and I was so intrigued that I messaged her to desperately ask if there is a Part 2 to this story, instead of an expected yes or no answer I got a challenge, what was the challenge you ask? The challenge was that I have to write part 2! Oh my word, I was so nervous and so excited at the same time! Chevone’s amazing writing skills is a hard one to live up to! I hope to do her proud. Here we go, I hope you enjoy it!

Glass shattering. Screams. Cries. Chaos.
The train stopped as it reached Jack’s destination. Seaview Station. His vision blurred. Slumped between carriages. Unaware. Unconscious.
In and out of consciousness, in a pool of blood.
“I NEED A MEDIC OVER HERE!! HURRY! I have a pulse! Teenager. Bullet wounds. Chest. Thigh. Hurry!!” echoed the voice over the two-way radio as Jack’s mother’s phone dropped to the ground as she frantically tried to force her way pass security…

What is that? Who is calling my me?, Why are they calling my name? Where am I? Why is my head so sore? Why can’t I see anything?, Why can’t I move?…
Dizzy, frazzled and in so much pain Jack heard his name being called in the distance, Was it a dream? Wait a minute.. that sounded like his mother’s voice? Jack’s eyes shot open, he saw his mother’s face for just a moment, panic, sadness, fear, desperation etched in her features, Why was she crying? Why was she looking at him this way?

Jack’s eyes grew heavy and gave way to the darkness once more.

18:55 Jack’s mom Sara jumped in the ambulance with him, it seemed like an eternity, but they finally got to Seabay Hospital, it was the closest hospital to Seaview station. Jack had lost a lot of blood, it was all over his mom’s hands after she had held him, it reminded her of something that she buried deep, deep inside a long time ago, the same blood but different, her husband’s blood. The memory sent shivers through her entire body, a memory she tried to escape at every turn, but this wasn’t about that night, this was different, Jack was different, he was a fighter, she taught him to be a fighter, she had to, he had no other man to teach him the things a boy should learn from his father, she had to be both a mother and father for him.

19:10 Lost in her thoughts, mind running wild, all Sara knew was that there had been shots fired and Jack had been hit. Prayers, worry, anger seared through her, what was she going to do now? What if he didn’t make it, what if he died? How would she go on? NO, she wouldn’t think of this, she wouldn’t give in. She closed her eyes almost as a way to stop the endless thoughts, but her mind drifted to the day Jack was born…

July 9th 2001, it had been raining for days on end, it brought a cold that went right to your bones, but Sara enjoyed this, it kept her indoors and it kept her warm and comfy, just her and her unborn son and the sound of the rain. Jack’s father had been at work, but since Sara was close to her due date now he came home early most days but not that day, he had to stay at work late.

At around 18:15, the pains started, Sara being a first-time mom didn’t think much of them at first, but they got stronger, scared she called her husband, he told her that it would take him an hour to get home, he used the train too. She said that it was fine, and that labour takes a long time, an hour is more than fine, and that she would call the hospital after she was done talking to him to ask when she should come in. The hospital told her that once the contractions are a bit closer and she is in active labour she should come in, she agreed and ran a bath. The bath did nothing for the pain, it only grew, after she got dressed she felt a small gush of water and some blood as well as more pain. Not long after but which seemed like an eternity, she felt a strong need to push, PANIC set in and she called the hospital, they said they would send an ambulance, she called Jack’s father, he said he was 20 minutes away. She managed to leave the front door open for the ambulance and sit on the couch, the pain searing through her. After 7 minutes the ambulance arrived and the need to push so strong she couldn’t hold it anymore, the paramedics told her that they can’t move her and that she was having this baby at home right now.

At exactly 19:14 on the 9th of July, after only a few pushes Jack came into this world, Jack’s father arrived only 2 minutes before he was born.

Sara then opened her eyes and looked at the clock on the hospital wall 19:14 exactly. Was it a coincidence? What did it mean? She waited, hoping with all her heart it meant he was alright, that it was a sign…

21:35, Jack was finally out of surgery, he was stable, they said he would wake up in his own time, he needed time to heal, time to come around after the surgery, he had been through a lot, the trauma, the pain, the surgery, but he made it through! The sound of the heart monitor, Jack’s rhythmic heart beat a welcome sign of relief! He made it off that train.

2 days later, Jack woke only briefly opening his eyes, not saying anything and falling back under again, later that day he woke again in a daze, in pain and confused. The doctor and nurses were called, they asked him some questions, if he knew where he was, who he was, what had happened? He couldn’t answer any of the questions, they deduced that Jack had amnesia brought on by the trauma…
He didn’t know why he was in hospital, what happened to him, or that he was the last boy on the train that day, but none of that was as bad as the moment he looked at his mother and asked…
“WHO ARE YOU?’’